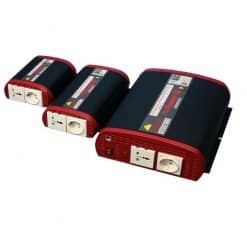 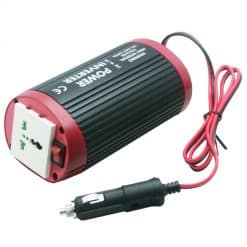 The obvious change in this new inverter is its style, tough aluminium extrusion with great looking plastic end caps, euro and English sockets are on all this range, on the smaller 300 – 800 range the euro is on the back and the English on the front, enabling the unit to be sold across Europe without any problems.

The new extrusion design has allow us to reduce the size of the 100 – 1800 watt units by nearly 40%, but still offer their full power and even better performance over the previous models.

All Sterling inverters are continuously rated, with all the usual overload, over voltage and low voltage cut outs, all the inverters come with cable and 24 kt gold connectors, in order to prevent battery terminal corrosion. Available in 230 volts for UK and Europe and also 110 volt for building sites / off vehicle use or for equipment supplied on boats made in the USA (not suitable for washing machine / some bread makers).

All inverters are supplied with about 1 metre of suitable D/C terminated cable and all units of 1000 watts and larger include as standard a remote control with 10 metre cable.

Sterling has invested in a new range of quasi sine inverters because they are smaller, lower cost, better performance, more efficient and more reliable than sine wave. We at Sterling have always found the quasi sine wave inverter more than adequate for the general requirements in boats and vehicles. There is still the odd appliance such as washing machines where quasi sine wave inverters simply do not work, but all in all they do a great job considering their cost. With this in mind we have made a new range of DIGITAL quasi sine inverters called the Pro Power Q. The idea behind this was to push forward this technology and bring in some new features. 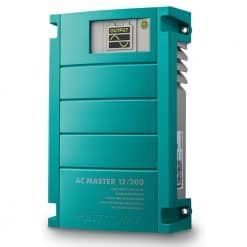 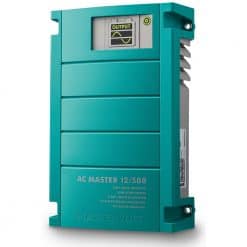 £ 154.95 - £ 749.95
We use cookies on our website to give you the most relevant experience by remembering your preferences and repeat visits. By clicking “Accept”, you consent to the use of ALL the cookies.
Cookie settingsACCEPT
Manage consent